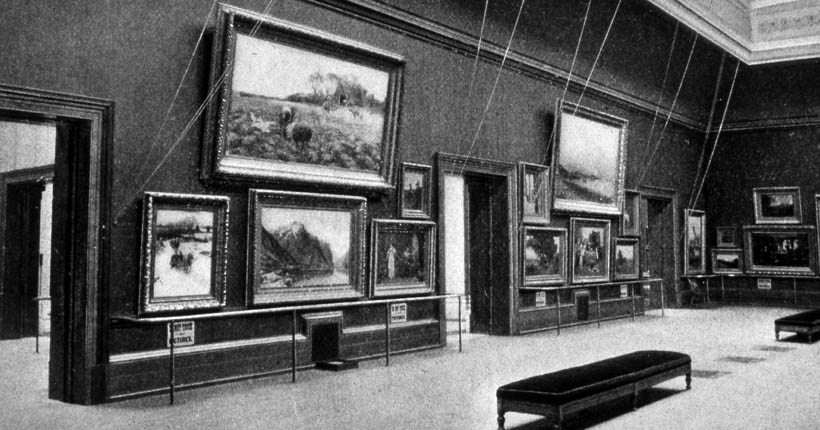 In the late 1800s, Milwaukee was a thriving port city, mostly German-speaking, with an industrial base that included meatpacking houses, tanneries, shipyards, brickyards, and breweries. As early as 1872, a number of organizations formed in Milwaukee to promote culture in the city; they presented art exhibitions and expected to establish an art gallery and formal art school. Exhibitions were mounted at Exposition Hall, Milwaukee’s showplace for industry and culture, but other efforts had only short-lived success.

Making good on a pledge made over dinner, businessman Frederick Layton (American, b. Britain, 1827–1919), established Milwaukee’s first permanent art gallery in 1888. Layton erected a purpose-built Greek Revival building on the corner of Mason and Jefferson Streets; London architects W. J. and G. A. Audsley were the designers. Layton provided the gallery with a $100,000 endowment and thirty-eight paintings, many of which remain in the Museum Collection today.

Under the leadership of Charlotte Partridge, the Layton Art Gallery broadened its activities: it lent artworks, dedicated one of its galleries to Wisconsin art, formed the Layton School of Art, and organized traveling exhibitions. The Milwaukee Art Institute, on the other-hand, became a haven for community arts groups during this time of social unrest across the nation and presented numerous avant-garde art exhibitions. Throughout his tenure as Milwaukee Art Institute director (1926–41), Alfred Pelikan also served as director of art education for Milwaukee Public Schools, forging a partnership around excellence in art education that continues today at the Milwaukee Art Museum.

After World War II, the Milwaukee business community became interested in building a complex for art and music dedicated to Milwaukee servicemen. The Metropolitan Milwaukee War Memorial Corporation raised funds and engaged architect Eero Saarinen, resulting in the lakefront masterpiece of mid-twentieth-century design. The War Memorial Center was dedicated “To Honor the Dead by Serving the Living” on Veterans Day of 1957. The Milwaukee Art Institute and Layton Art Gallery moved into their new quarters, and together became the Milwaukee Art Center.

In the late 1960s, Mrs. Harry (Peg) Lynde Bradley offered her entire collection of more than six hundred Modern works of art to the Museum. She challenged the community to build an addition to house her extensive collection and donated $1 million towards construction. The challenge was met: in 1975, the Kahler building opened with vastly enlarged galleries for the Museum. This decade saw a number of important gifts to the Collection, including the Richard and Erna Flagg Collection and the René von Schleinitz Collection. The Museum’s Friends of Arts started the popular Bal du Lac (1958) and Lakefront Festival of Arts (1963), raising additional funds for Collection growth.

In 1988 the Museum celebrated its centennial and, looking towards the future, developed plans for another expansion. On December 10, 1997, the Milwaukee Art Museum began construction on the addition Spanish architect Santiago Calatrava designed to carry the Museum into the next millennium. The bold Quadracci Pavilion opened in 2001 to rave reviews and was adopted as an icon of Milwaukee. The project included a grand hall, new exhibition galleries, and an auditorium, as well as a store and a café, bringing the total size of the Museum to 341,000 square feet.

The Milwaukee Art Museum is the largest art museum in the state of Wisconsin, housing a Collection of more than 30,000 works and hosting an impressive lineup of internationally regarded exhibitions. The Museum sees almost 400,000 visitors each year, with nearly 21,500 holding annual Museum memberships. The Museum’s stellar art education program serves over 50,000 youth each year through programs, tours, and internships.