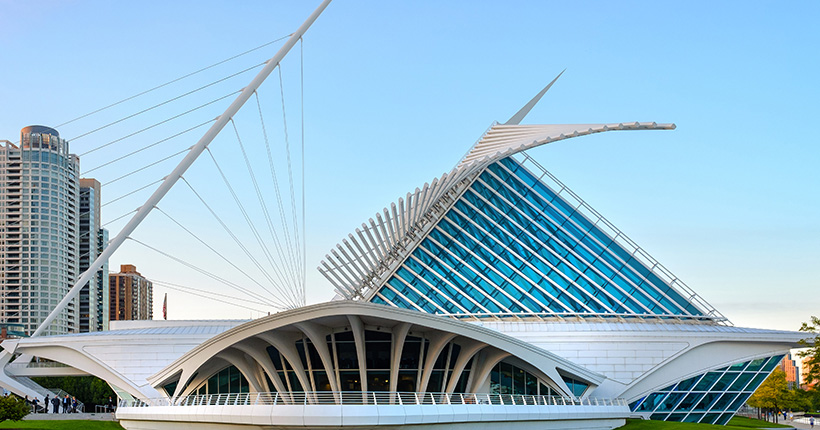 Architect and sculptor Santiago Calatrava was born in Valencia, Spain, in 1951. He earned a degree in architecture and then in civil engineering, intrigued by the mathematics behind historic architecture. Early in his career, Calatrava worked as an engineer and began to enter architectural competitions, believing this was his most likely way to secure commissions. His first winning competition proposal, in 1983, was for the design and construction of Stadelhofen Railway Station in Zurich. The next year, Calatrava designed and built a bridge for the Olympic Games in Barcelona; this was the beginning of a series of bridge projects that established his international reputation.

In the mid-1980s, Calatrava began to get hired for large-scale public projects, and opened offices for his company in Zurich, Paris. and Valencia. During this period, he also began to exhibit his abstract sculptures in museums and galleries. Calatrava regularly traverses the lines between art and architecture; his buildings are frequently called sculptural, while his sculptures and paintings are like sketches of buildings.

Calatrava is known for his flowing, curved buildings. He uses steel, concrete, and new computer modeling to create compositions that appear at once natural and structurally impossible. If “form follows function” was a rallying cry of modern architecture, Calatrava’s postmodern structures turn this maxim on its head. His designs suggest stylized natural objects—waves, wings, or sun-bleached skeletons, with rows of white concrete ribs curved into distorted parabolic arches. The true purpose of these dramatic contours are typically more aesthetic than structural.

The Milwaukee Art Museum addition was Calatrava’s first project in the United States. Feeling insecure about working in the U.S., he actually withdrew himself from the selection process in 1994, only to be coaxed back. Today, Calatrava has completed dozens of buildings and bridges around the world, with many more in the works. His theatrical, uplifting designs are immediately recognizable, and often his buildings, like the Quadracci Pavilion, look poised to soar away on the breeze.

Calatrava on the Milwaukee Art Museum

“For me, the project of expanding the Milwaukee Art Museum was an opportunity to help people make the most of an extraordinary situation.

The design did not result from a sketch. It came out of a close collaboration with the clients…who truly wanted from me the best architecture that I could do. Their ambition was to create something exceptional for their community.

The extension, as such, is a kind of pavilion, transparent and light, which contrasts with the massive, compact Saarinen building. Reaching out from the Quadracci Pavilion, like an arm extended to the city, is a bridge.

Besides being a link to the city, the bridge is part of a composition. Its leaning mast conveys a sense of direction, of movement, which is taken up by the roof, the cables, and the canopies that extend on each side. These strong lines culminate in the Burke Brise Soleil, which translates their dynamism into actual motion.

I hope that…we have designed not a building, but a piece of the city.”